Well, here I am: 30 weeks pregnant, 10 more weeks to go. It seems like I’ve gotten everything done to prepare for the baby that I possibly can, although there’s still a lot that needs to be done. Thankfully, my house is staying somewhat picked up and cleaned so all I have to do is pick one or two things a day to “touch-up” and my housework stays caught up. That is SO much of a relief because it felt like the whole second trimester I was trying to catch up on ALL of the housework that got neglected during the first trimester.

Anyways, with my more-free-time-than-normal, I decided to pull out the sewing machine. I was complaining to my mom all last week how my machine wouldn’t run fabric and how I just didn’t know what was wrong with it. Yesterday, I pulled it out and rechecked all the important things: tensions, presser-foot pressure, and then this little knob I had never noticed before caught my eye. I had no idea what it was and had to look it up–turns out it was the stitch length dial and mine was set to a 0.5 on a 0-4 scale. Basically, all of my stitches have been way too short and close together causing my material to bunch and not feed through the machine… I was amazed when I changed it to a longer stitch and my “most difficult fabric” went right through with a beautiful stitch on the other side!

My project yesterday/today: Mei Tai Carrier. Not long after finding out I was pregnant, my dear friend Calley started sending me different pictures of baby carriers. Her favorite is the mei tai carrier and I can definitely see why! She sent me this picture of a dad wearing a camo one carrying his baby around and when I showed Lance he said, “I want one JUST like that!” Ok, simple enough, except that it cost right around $100!! I told Calley what I found out and she said she had made one of her own and it was very simple. She showed it to me and it was then that I decided I would make Lance one! 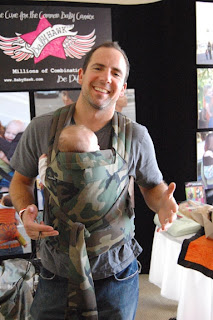 This is the picture Lance saw and what he wants!

I ordered the fabric to make his for under $20 and my mom gave me a yard of Zorb, which is what I am going to use as padding in the straps and the body of the carrier. But since I want his to be great, I decided yesterday that I needed to try my hand at this thing before I make his and potentially have wasted money on fabric!

I had ordered a carseat cover a few months ago, but when I put it on the carseat, it didn’t fit. Too small, of course! I’ve had the cover just laying around now and decided that if there was enough fabric there, I would use it to make the carrier! Sure enough, there was enough for a pretty outside, a soft, minky inside, and the fabric for my straps was some I had given to me a while back. I used half of the Zorb my mom gave me for Lance’s and still ended up with some extra. 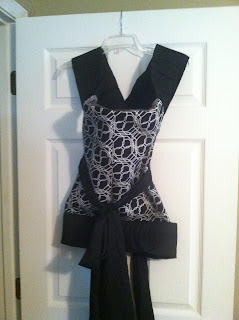 The front of the finished carrier! The patterned fabric was actually the cover that you pull over the top of the carseat to protect from the sun, etc. 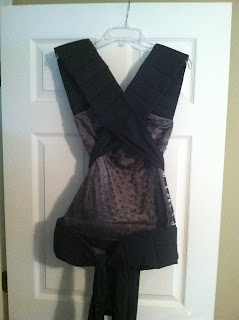 The back view where you can see the soft, minky type fabric I used on the inside. This was the actual cover intended to go over the carseat, but it was just too small!

I used this tutorial as a guide to make mine. I didn’t really stick to this that much. Actually, the only thing that I did follow EXACTLY how she lists it was the pattern, amount of fabric and the actual order of assembling everything. Other than that, none of my fabric was what she suggested, my padding was zorb [very thick so I used a lot less than called for], I didn’t make a headrest/hood and I didn’t actually stitch everything like she instructed. LOL it really is a great tutorial though, especially if you’re unfamiliar with sewing.

I should be getting Lance’s camo fabric in next week and plan on making his for him after we get back from the Bahamas. He has a few things he wants done differently than the way I made mine so it’s good that I made this one first!

I’ll sum this up with one last thought. I was reading Psalm 100 this morning and verse 3 really stuck out to me. It says this: Know that the Lord, he is God! It is He who made us, and we are His. We are His people, and the sheep of His pasture. As crazy as it is, God showed me this whole cool analogy using the mei tai I had just made. I am completely, head-over-heels, in love with my new carrier and can hardly wait to use it! I think it is AWESOME! But… to some, especially those with sewing experience, they will see the imperfections in the carrier. The simple truth God showed me through that verse was that even though others may look at us and see imperfections, even though we may look in the mirror at ourselves and see every place we fall short, God is still completely, head-over-heels, in love with us for the simple fact that it is He who made us! I was just blown away by that this morning! I pray that you feel the love of God all over your life today, in everything that you do! =)