While I was pregnant with Elijah, Lance and I started doing our research on different types of baby carriers. My good friend, Calley, had a few of her own that she pulled out and showed me. She explained the best uses for them and told me that I could most likely make any one that I decided I wanted to make. One night, she sent me this picture and when I showed it to Lance, he said, “I WANT ONE!” 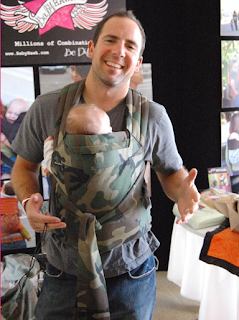 I got to researching and found the website that this came off of. It’s from Baby Hawk, but costs $89.00! I thought that was bad until I started searching for other camo carriers and they were $100+ on other sites! I knew I could sew one for a lot cheaper than that, so I set out to do it!

The obstacle I faced was that I had only been sewing for a VERY SHORT while and most everything I had taught myself or picked up by watching my mom sew. I was calling her almost every time I had a project to ask about how to do “this” or “that”. My husband isn’t difficult to please by any means, but when it came to the carrier he told me, “I want it to look JUST like that one.” No pressure. I decided the best thing to do would sew a “test” carrier first before tackling his that had to be seemingly “perfect”. I had some extra fabric laying around so I got to searching for a pattern. I couldn’t find one that I was totally in love with, but I found one close and just modified it from there to fit what I wanted. All of the patterns had a hood attachment to the carrier that you could pull over the baby’s head and tie, or convert it to a headrest, but I didn’t like that.

This is the first carrier I ever made. I fell in love with it after using it the first time! And Elijah really liked it, too. I quickly learned that there really was no need for a headrest because he would lay his head against my chest and it was secure with the body of the carrier behind his head. Now that he’s older, his head sticks out over the top and he looks around everywhere! The best thing about this carrier is that I can put Elijah on my back with it, so it’s a front or back carrier! 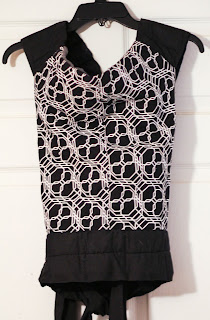 Now, Lance was impressed, but if you notice, I sewed my “quilting” horizontally and in the picture of the carrier he wanted, the quilting was sewn vertically. This was a big debate between us. He insisted they needed to be vertical while I pleaded that I didn’t think my sewing skills were at a level where I could sew them vertically and they look good. I realized he wasn’t budging and that I should listen to what he wanted and take on the challenge.

I was SO nervous getting started on this one. I took my time and made sure everything was done exactly like it was supposed to be. I added a little piece for a headrest to this carrier, but it has never been used. I finished it and brought it up to Lance’s work one day to surprise him. He almost started crying-it was sweet! He tried it on and showed it off to everyone. The look on his face let me know that I had made exactly what he wanted and I could tell he was pleased! Challenge accepted – challenge dominated! When Elijah was three weeks old, we went to the Balloon Races, a big festival here in the Miss Lou and Lance carried Elijah everywhere in his carrier, showing off the baby and the carrier. So many people asked about it and he was so proud to tell them I made it for him! =) 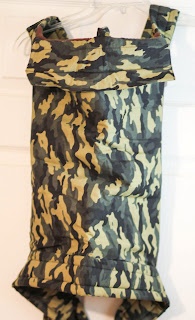 I’ve since made three carriers for other people. An interesting note is that now ALL I do is vertical quilting on the straps. It’s a LOT quicker, and really flows a lot better with the whole carrier! 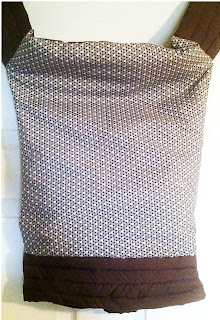 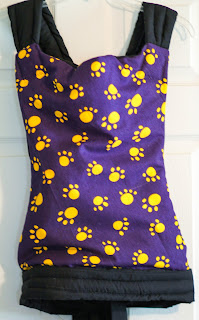 This carrier I just made this week for my friend, Michelle. A group of us went to Jackson a few weekends ago for a race. Michelle and I watched our hubbys run while we tended to our children. She has a 3 year old daughter. I had Elijah in my carrier and then put him in his stroller a little later. Michelle’s daughter was getting tired and wanted to be held, and for those of you with children that aren’t babies, you know it’s exhausting to hold them! So I offered her my carrier and she asked, “Will it hold her?!” I told her yeah! So we tied it all on and get her daughter in it! Michelle was instantly relieved and now she could relax her arms while the carrier did the work. They’re going on a cruise shortly and she asked me if I could make her one! This is the one I just finished for her. She sent me a picture that night of her daughter wrapped up on her back in it! 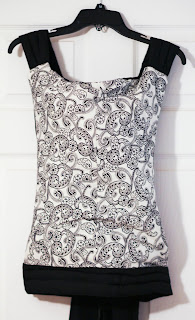 I have 4 more carriers lined up to make, all mossy oak camoflauge! As soon as the fabric comes in, I’ll be able to sew them. I’m excited because one of them I am going to sew bright orange straps to it… I think it’s going to look great! I’m so glad that I’ve learned to sew – who knew it would be so useful!? =)