It’s been a while since I wrote a post, but life just got busy all of a sudden and free-time was one of those things I dreamed of, but haven’t experienced much of lately. Well, until the past few days, but we’ll get there!

To start with, a friend of ours, Jerry, asked us last month if he and another friend, Brian, could come down for a weekend in June. We told them sure, come on! My guest room was a DISASTER so I knew it needed to be cleaned out. It just so happened that we were having a garage sale at church to raise money for The Jessica House (I’ll explain a little more about that in a different blog post soon so be on the lookout!) so it was the perfect opportunity for me to clean up and clear out! I started in the front of the house, but once I got in to my project, I realized there was more to do than I originally suspected. Once I got going though, things really took off. After it was all said and done, I brought a couple car loads of stuff to the garage sale, threw away 6 bags of trash and donated 4 bags of clothes to Goodwill. Phew! So fast forward to last week.

I spent last week putting away everything that was left from my spring cleaning streak. It literally took me all week to organize, put away, and clean my whole house. I mean, I was putting in almost 12 hour days every day! But my house hasn’t looked this good in over a year! Unfortunately, on Thursday, Elijah started running fever. This is only the second time he has ever ran fever so I was hoping it was because he was teething. Come Friday, he was still running fever though and it was climbing. Friday night, his temperature got to 105 and after an house, despite everything that we did to get it down, it was still at 105. He was acting perfectly fine, actually getting mad that we wouldn’t let him play with his toys, so we let him play for a bit, but made the decision to go to the ER to have him checked out. When we got there and got checked in, apparently the tylenol had begun working because his fever had come down to 102 something. We waited around at the hospital for 3 hours for them to tell us it was an upper respiratory infection, keep giving him the tylenol, and make sure he gets plenty to drink. All in all, I’m glad he is ok! He woke up fever-free Monday and has been since then. Here’s a picture of us hanging out in the ER: 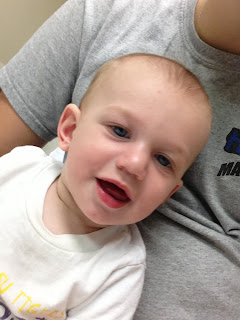 Saturday, Jerry and Brian showed up. We had a nice visit, went out to dinner at Roux 61, and then came home to hang out. We got to listening to some music that Brian has composed, which is really good! Lance turned on Misty Edward’s song I Knew What I Was Getting In To and not long in to it Jerry said, “I need a pot and towel. Keep this song going for however long this takes.” He came back and began to wash Lance’s feet, praying over him the whole time. Then he followed suit by washing my feet and praying over me. Brian then came over and stood over us and prayed over our whole family. It was an awesome time of worship and ministering. 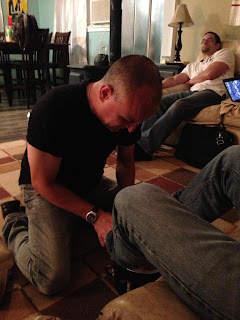 As it would go, I said I haven’t had much free time lately and I guess it was something I really needed. Well, more so a time of rest. Monday I started feeling ill and by Monday night I was running fever. I felt terrible. Tuesday and yesterday, my day consisted of waking up, giving Elijah a bottle and praying he would go back to sleep so that I could. Then we’d get up and I’d block off the living room for him to play in while I laid on the couch. When he was ready for a nap, I’d fix him a bottle and then lay him down in his crib to sleep while I went back to our bed and slept. There’s been a LOT of resting going on this week for me. Today is the first day that I’ve woken up without fever and actually feel decent. I still have all the same sickies going on, but the fever seems to be what made it so much worse. I’m pretty sure I just got what Elijah had. 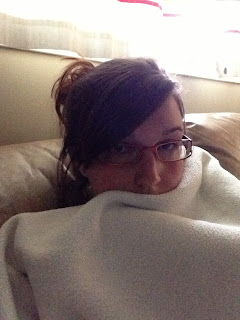 The boys went to church without me last night. I got this cute picture of Elijah swinging at church. He was loving it according to Lance and this picture reaffirms that! Guess we’ll be buying him a swing in the near future! 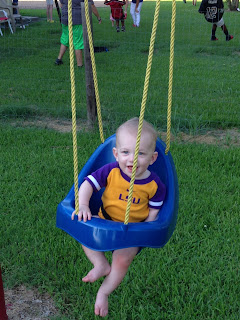 Last night, Elijah wore his big boy pajamas to bed. They’re 12 month pajamas and fit him so much better than I thought, and I guess than I had hoped. The reality that my baby boy is growing up is so apparent each and every day. He now crawls, pulls up, and has started taking some steps while holding on to things. It wont be long before he is walking and saying words with meaning. He will be 9 months old next week, but I still think of him as my little newborn baby! I’m so excited that he’s learning and it really is amazing to see him learn all of this stuff on his own. It’s awesome how God designed us. 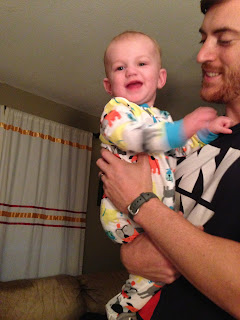